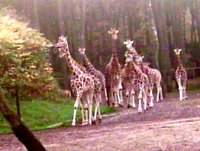 Digestion coefficients were calculated using, as internal marker, the acid detergent lignin content of a faecal sample pooled from subsamples taken during the last 5 days of intake measurement. Two lucerne hay-only diets of differing quality (L1, L2) were fed, as well as the regular diet of lucerne hay and concentrates (L2C), and the regular diet supplemented with 3 or 6 kg of edible, fresh browse material (L2CB3, L2CB6). The proportion of roughage in the ingested diets L2CB6 (45 ± 5% dry matter), L2CB3 (35 ± 3%) and L2C (37 ± 10%) did not differ significantly. Digestible energy intake was low on the hay-only diets [L1: 0.28 ± 0.06 MJ/kg body weight (BW)0.75; L2: 0.33 ± 0.10 MJ/kg BW0.75] and increased from L2C (0.60 ± 0.13 MJ/kg BW0.75) to a significant increase with L2CB3 (0.72 ± 0.17 MJ/kg BW0.75); no further increase was obvious for L2CB6 (0.63 ± 0.15MJ/kg BW0.75). The results confirm that giraffes are unlikely to meet energy requirements on lucerne hay-only diets. In a feeding scenario where both lucerne hay and the concentrate component of the diet are fed ad libitum, the animals tended to exchange hay for browse when browse was added. Only the higher level of browse supplementation led to a potentially beneficial increase in fibre intake. Whether additional browse supplementation will lead to increased intakes in a feeding scenario with restricted concentrate provision can be suspected but remains to be demonstrated.