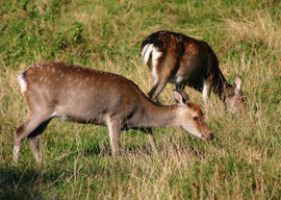 We measured the rate at which the food passed through the digestive tract, digestibility and rumen fermentation during the summer (August), autumn (November), winter (February) and spring (May). Total mean retention time in the digestive tract during summer and autumn was numerically longer than that in winter and spring, but the difference did not reach significance. Organic matter and fiber were less digestible in summer and autumn than in winter and spring (P < 0.05), whereas the digestibility of the dry matter tended to vary with the seasons (P < 0.1). Ruminal pH values seasonally changed (P < 0.01), and were the lowest in autumn. The concentration of ruminal ammonia-nitrogen differed significantly among the seasons (P < 0.05), increasing in winter and decreasing during spring and summer. The numbers of protozoa changed significantly among the seasons (P < 0.05), being higher in autumn than in winter and spring, and intermediate in summer. The concentration of total volatile fatty acids was not seasonally affected, but the molar percentages of propionic acid and butyric acid significantly changed according to season (P < 0.05 and P < 0.01, respectively), and the ratio of acetic to propionic acid tended to change with the seasons (P < 0.1). The results of this study suggested that the digestive functions in sika deer, fed a commercial diet at a restricted level, differed notably among the seasons and these variations might partially be due to environmental effects.