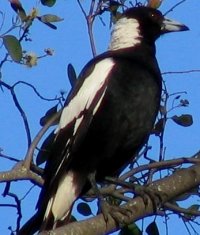 Advocates insist the practice is beneficial, while opponents maintain that it can result in a wide range of negative outcomes including malnutrition. The biological effects of 'backyard feeding' were studied in Australian magpies Gymnorhina tibicen during the non-breeding season in 1999 in the Greater Brisbane and the Lockyer Valley regions, south-east Queensland, Australia. Six magpie populations were selected and 70 birds were individually tagged for identification. The birds were provided with processed foods, 2040 g per bird daily. To monitor the effects of the food, blood chemistry and body mass (BM) were used as indices. Significant effects were observed in BM and plasma cholesterol (PC), showing strong sensitivity to food provisioning. Significant effects on PC and uric acid were found only when birds were fed dog sausage. Results suggest that blood PC levels in magpies are readily influenced by, probably, the lipids present in food, and that the type of food can affect blood PC levels. These effects may occur widely among fed magpies if the influence that we demonstrated at plasma level can be generalized. Following the free-ranging study, six magpies were captured and subjected to a 6-day captive experiment to determine whether the selected foods had the potential to alter the birds' blood chemistry. It was found that all of the foods, when provided ad libitum, influence at least two of the three blood parameters (PC and non-esterified fatty acids). Due to its popularity, wildlife feeding will continue. To make wildlife-feeding activities truly sustainable, there is a need for further studies. This study clearly demonstrated that the physiology of wild magpies can be affected by 'backyard feeding'.
Austral Ecology