Source: scientias.nl, photo by Jenny
The anemonefish, also known as the clownfish (and made famous by the animated fish Nemo) has an unusual relationship to the sea anemone. This little fish is allowed to hide among the tentacles of the anemone, and in return it eats the parasites that threaten the anemone. 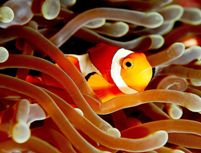 Both organisms benefit from this relationship. Still, according to a researcher from Auburn University (USA), there must be another reason for this collaboration. Coral reefs, where the sea anemones are found, have trouble at night getting the oxygen they need. Oxygen is plentiful during the day, but it is less available at night. Damselfish are known to spread oxygen-rich water over the coral. It was possible that the clownfish could do something similar for sea anemones.
First, the oxygen consumption was determined of the sea anemones together with the clownfish. Then the anemones and fish were separated, and oxygen consumption was again measured for each. When together, the fish and anemones consumed 1.4 times more oxygen than when apart. In the next experiment, oxygen consumption was again determined while the fish and anemones were still separated but could see each other. The oxygen consumption remained lower. Apparently, physical contact was essential.

Observation with the aid of cameras revealed what happened when the clownfish was with the sea anemone: at night, the clownfish was very active and lively. The fins often moved vigorously and the fish dove deep into the anemone, which was forced to open up a little. And this is how the little fish provided the anemone with extra oxygen. The fish is apparently very effective: merely increasing the water flow over the sea anemone did increase its oxygen consumption mildly, but not as much as the clownfish could.