Source: uu.nl
Yaks live in the highlands of Tibet under very barren conditions. Scientists from universities in China and the Netherlands have now discovered that yaks possess extra genes to allow them to survive under these extreme conditions. 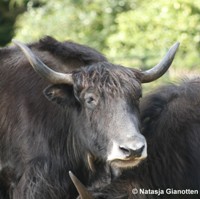 The yak is related to the cow. These animals are very important for the populations of Tibet and surrounding areas, as they provide milk, meat, wool and leather. Above 3000 metres, which is home to the yak, not much grass can grow. It is also extremely cold at these altitudes, and the air doesn’t contain much oxygen. Thriving under these conditions is quite a feat. An international research team from a university in Lanzhou, China and the school of Veterinary Medicine in Utrecht, Netherlands, has studied the yak’s genome. The complete genome was published in Nature Genetics. The yak has more genes than the Dutch cow. These extra genes are important for energy metabolism and for adaptation to low oxygen concentrations and pressure. The yak’s sense of smell is also adapted, making it possible for the animals to smell where more grass can be found under the snow.

It is possible that this knowledge of a gene against altitude sickness in yaks could lead to help for humans. A quarter of the people not living in the mountains is bothered by this problem at elevations as low as 2000 to 3000 metres above sea level. Knowledge about genes that play a role in this process could help in the development of better treatments.