Source: news.bbc.co.uk, photo Laszlo Ilyes
That beavers build dams and live in lodges is common knowledge. The only thing known about beavers' life in the lodge, however, has been when it goes in and out. Now, thanks to tiny waterproof cameras, we can see into the lodge without disturbing natural behaviour. 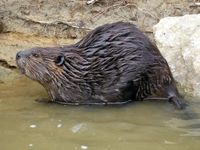 Cameras were installed in 23 beaver (Castor canadensis) lodges in the flood plain of the Mississipi. Observations, recorded for a year, yielded surprising insights. Approximately 95 percent of the beavers’ time in the lodge is spent eating, sleeping and grooming. The lodge is a relatively safe place where beavers exhibit behaviours that might be dangerous in the open. Another discovery is that males and females spend roughly equal time caring for the young. Both young and adult beavers sleep about as much as humans, but one adult beaver always remains awake, probably to keep an eye on the young. The kits take more naps: they sleep for a few hours and are then awake for a while.

It had been assumed that beavers are quite cut off from the outside world in their lodges, but that is apparently not the case. At fairly fixed times they leave the lodge to look for food. Another assumption was that aggressive behaviour would be seen, as most animals living in social groups exhibit aggression to determine the rank of individuals. In the beaver colony, however, no aggressive behaviour was observed.
This link includes a short film of beaver life in the lodge:
Licence photo: Creative Commons Attribution-Share Alike 3.0