Half rooster, half hen

Source: nationalgeographic.com
Every once in while an animal is half male and half female. We call this phenomenon gynandromorphy. Scientists have now discovered how this works. In chickens this occurs in about 1 in 10,000 cases. 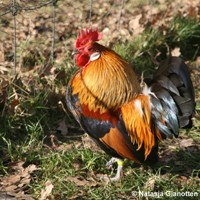 A gynandromorphous hen-rooster is a rooster on one half of the body, with a comb and a leg spur, while the other half looks like a hen. Researchers from Edinburgh University thought that the condition was caused by a genetic defect. Cell material from three gynandromorphous animals was studied. To their surprise the cells appeared to be completely normal. Only one half of the body consisted of female cells and the other half consisted of male cells. The researchers now suspect that the gynandromorphous animals are created when a chicken egg is fertilized by two sperm cells.
Despite their hybrid exterior the animals have only one set of reproductive organs. The hen-roosters either had testes or ovaries. The researchers did not test whether the animals can reproduce normally.

Note that a hermaphrodite is completely different from a gynandromorph. A hermaphrodite is entirely functional as both a male and a female. This is not a mistake of nature, but an ‘official biological blueprint’. Freshwater snails and rain worms for example are hermaphrodites.

The rooster in the picture is not a gynandromorph.