Source: nrc.nl
Vasopressin is important for social recognition in rats. When vasopressin neurons are blocked, rats keep acquainting themselves with rats that they have already met before. 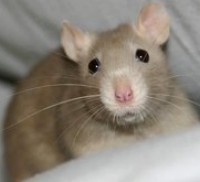 Vasopressin is a hormone that regulates the body’s temperature and electrolyte balance. In the brain this hormone plays a role in aggression and social behaviours such as mating. According to neuroscientists the olfactory centre plays an important role in social recognition. This centre is located near the nose and contains many neurons releasing vasopressin.
The researchers conducted recognition experiments with rats to find out what functions these neurons have. They had an adult rat meet a younger rat. Then the young rat was removed and placed back later together with another young rat. The adult rat mainly sniffed the new rat, because he already knew the other one. But when the adult rat had received an injection that blocked vasopressin, the adult rat sniffed the two youngsters for an equal amount of time.
The neuroscientists concluded that vasopressin in rats works as a filter of scent information. The scent profile of a rat is stored into the brain. When this scent comes by again vasopressin links it to the stored information. Possibly, scent profiles are also linked to experiences. Vasopressin also plays a role in aggressive behaviour. It is believed that after a bad experience with another rat, rats immediately respond aggressively in a subsequent encounter.