Source: uu.nl
The Asian elephant is not doing well, both in the wild and in zoos. In the wild, the animal's habitat is becoming ever smaller and shattered. The main problem with elephants that are kept by humans is difficulties in reproduction. 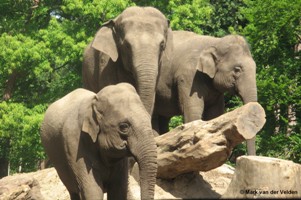 New insights in the fertility cycle of the female Asian elephant might help to save the species from extinction. A researcher from the University of Utrecht, Charchote Thitaram, studied the physiology of elephant reproduction in Thailand. She studied how the cycle of the female elephant was influenced by the season and to what extent the cycle can be influenced with hormones. Additional knowledge about the mating behaviour and the way the male notices that the female is in season should make sure that the couple is put together at the right time. When more is known about the cycle of the female elephant, the ovulation could be stimulated artificially by means of an injection. This way, the time of ovulation could be predicted for 90 percent, which is crucial for both natural insemination as artificial insemination.

The thesis is entitled: “Elephant reproduction: improvement of breeding efficiency and development of a breeding strategy.”