Source: EZNC
In the summer months, animals and people, but especially dogs and cats, may be bothered by the wall barley. The wall barley is a grass-related stub, that looks like a small, green ear of wheat. The seeds may pierce into the skin of animals and cause a lot of nuisance. 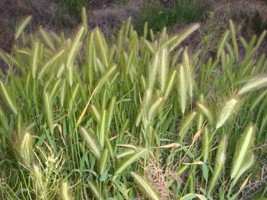 The wall barley (Hordeum murinum) is also known as mouse barley. It blooms from June until autumn and is very widespread. It can be found on roadsides, paddocks, dunes and forests. It also occurs in the built-up area, between paving bricks, tiles or alongside walls. The ears look like a small version of wheat ears. They have sharp edges with barbs and stick to clothing.

They can stick easily to the fur of animals, get stuck between their toes, or even end up in their nose, ears, eyes or in little wounds. The seeds may pierce the skin and cause itching or infections.
When the ear is spotted on time, it can be removed with a pair of tweezers. But when a piece of ear is stuck deep, it has to be removed by a vet.
Shaking the head, scratching nose or ears and sneezing may be the sign of wall barley problems.