Source: zeehondencreche.nl
Prince Edward Island in Canada, home of many seal hunters, is to harvest a professional seal rehabilitation centre before June this year. This was recently reported by Lenie 't Hart, director or the seal rehabilitation and research centre (SRRC) in Pieterburen. 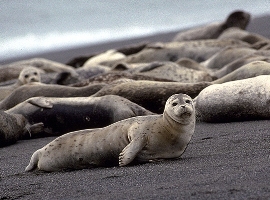 The island has already got one small private relief centre, which shelters animals that have run into trouble around the island. Pieterburen has been asked to turn this shelter into a professional centre. The permits for this have already been granted. The centre is now looking for moneylenders to obtain the 10.000 euro it needs. A basin is to be created, as well as a plateau for the animals to rest. The people who will man the rehabilitation unit have been educated in seal care at the SRRC in Pieterburen.

Lenie ’t Hart wishes to open the new rehabilitation centre before June, because this is the time when young seals are being born.