Noise, predation risk compensation and vigilance in the chaffinch 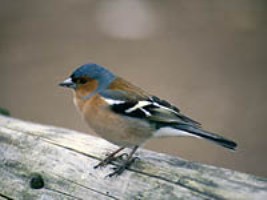 We tested whether foraging chaffinches Fringilla coelebs responded to background noise by increasing vigilance, and examined whether this was explained by predation risk compensation or by a novel stimulus hypothesis.

The former predicts that only inter-scan interval should be modified in the presence of background noise, not vigilance levels generally. This is because noise hampers auditory cue detection and increases perceived predation risk primarily when in the head-down position, and also because previous tests have shown that only interscan interval is correlated with predator detection ability in this system. Chaffinches only modified interscan interval supporting this hypothesis. At the same time they made significantly fewer pecks when feeding during the background noise treatment and so the increased vigilance led to a reduction in intake rate, suggesting that compensating for the increased predation risk could indirectly lead to a fitness cost. Finally, the novel stimulus hypothesis predicts that chaffinches should habituate to the noise, which did not occur within a trial or over 5 subsequent trials. We conclude that auditory cues may be an important component of the trade-off between vigilance and feeding, and discuss possible implications for anti-predation theory and ecological processes.